In the heart of this region is the Serra da Estrela, the highest mountain range in Portugal. The mountain range is about 100 km long and is 30 km at its widest point. It is formed from a granite ridge that once formed the southern frontier of the country.

The area ranks among Portugal’s outstanding scenic attractions which will undergo important improvement work to the tune of €75 million over the next ten years, including the extension of the ski run.﻿

Anglers from all over the world fly in to fish the waters in the Serra da Estrela National Park and the World Fly Fishing Championship 2006 was held on the Rivers Alva, Mondego and Ceiria. . Ocean fishing does not require a permit, but fishing in freshwater streams and rivers does. Regional tourist offices will give you information about permits. The Mondego river which is the biggest river of Portugal, rises in the Serra da Estrela.

There are spa towns such as Curia and Luso. Portugal's most popular brand of bottled mineral water comes from Luso. The spa is claimed to be beneficial to the treatment of a wide range of conditions, from arthritis to liver and kidney problems. Curia also owes it existence to the healing properties of its famous mineral waters. The quality of its water was known as far back as the Roman times.

Curia has a new golf course.. This is a challenging nine hole, 34 par, executive golf course, with an area of around 20 acres and a track distance of 2407 meters (2632 yards). Oporto Golf Club is located 17 kilometers to the south of Oporto beside the beautiful beaches of Espinho. It was established in 1890, when British residents in Porto created the club. Miramar is one of the oldest Portuguese golf courses and one of the most traditional in the country. When the course was inaugurated in 1932, Frank Gordon and Arthur Mariani were jointly responsible for the design, a nine hole course for Par 34 over 2.579 meters. Golf de Montebelo is in Viseu located in a unique landscape with exceptional views over Serra da Estrela and Serra do Caramulo. 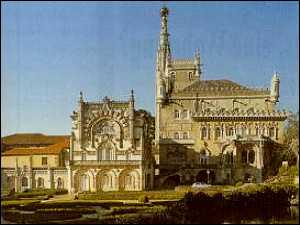 Visit Buçaco Palace with its magical forest of around 700 varieties of trees, many of them brought by Portuguese explorers from Africa and the New World, and including 300 exotic species such as Himalayan pines and Mexican cedars.

Coimbra is a picturesque University City steeped in history. It was previously the first capital of Portugal prior to Lisbon and also had the first University in the country. The University still dominates the skyline on top of a steep hill on one bank of the River Mondego (which cuts through the centre of the City).

Coimbra retains a laid back atmosphere rather than the hustle and bustle of a major city. In and around this region are many historical sites, castles, monasteries, roman ruins and other places of interest.

Your Villa in Portugal